130 days ago, my family in Bayamón, Puerto Rico, lost the roof over their heads. Hurricane Maria nearly destroyed the home where a young couple raised five children, cared for 13 grandchildren and welcomed six great-grandchildren. My grandfather Carlos built the two-family home himself, and today it’s still the place we choose to gather—thanks to some quick thinking, expert loss prevention advice from Berkley One—the company I work for—and the unbelievable generosity of 150 people.

Maria hit Bayamón on Wednesday, September 20, 2017. Three long days later, we had yet to hear from family. Were they okay? Did the house survive? What could we do to help? We knew that a few weeks earlier, Irma had come and gone with no damage—but this was different.

We set up a WhatsApp group chat to connect my U.S. family with all of my family members in Puerto Rico. On September 24th, we finally heard from them. Everyone said they were okay, but it was clear from the news coverage that the situation in Puerto Rico was bad—very bad. My family in Bayamón just didn’t know it yet. 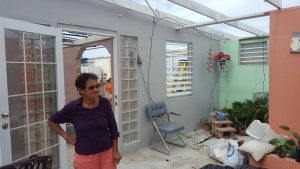 With their replies came photos. My jaw dropped the first time I saw an image of the house after the storm. The roof over the kitchen and living room was completely gone. I could remember standing at the table in that kitchen to make pasteles with my grandparents as a little girl and, many years later, sitting on the couch in that living room while my son played with the next generation of cousins.

Now, in the photo before me, my 80-year-old grandmother stood strong with her hands on her hips taking it all in. This was the moment where I knew I had to do something.

Taking matters into our own hands

I used a WhatsApp group chat to ask family members to let me know what they had and what they needed most. For example, “we have a gas stove for cooking but need bottled water for drinking.” Or, “we have running water, but need more D batteries for flashlights.”

Then, I considered resources. I called all my contacts to gather information. I realized that my job in insurance could really make a difference for my family. Insurance providers and professionals rebuild homes and lives, protect property from further damage, and get families back on their feet during crisis. I also remembered that many people in Puerto Rico don’t have insurance, and I was sure my grandmother didn’t.

At the same time, dozens of friends, family and colleagues called and texted to ask what they could do to help out. I set up a GoFundMe page that shared some of the pictures with a brief heartfelt message. The first donation came in within a few minutes. The post was shared 353 times on Facebook. We received donations from people we didn’t even know! I was completely overwhelmed with joy and gratitude as I watched 150 individual donations come in, many from my colleagues at Berkley One, insurance brokers and industry friends. We shattered our original fundraising goal of $2,000, reaching a total of $12,010. Now I needed a plan on how to best use the funds.

A few weeks before Hurricane Maria, with Harvey headed toward the Gulf of Mexico, the team at Berkley Asset Protection, a Berkley company specializing in insurance for personal and commercial art and jewelry risks, had huddled to figure out what loss prevention advice we could send to customers in Texas. (In addition to my work in strategic marketing at Berkley One, I also lead marketing for Berkley Asset Protection’s fine art practice). Among many ideas, we discussed a hurricane-grade tarp for outdoor sculptures that could be wrapped around a metal frame to protect the large sculptures that could not be moved out of harm’s way before the storm.

Thinking back to that work session, I wondered: what if a tarp like that could be draped over my family’s roof? While I didn’t know the answer, but I knew who would—my colleagues at Berkley One. So on Sunday September 24, the day I first saw the picture of my family’s roof and just four days after the storm, I emailed Dave McKeon and Paul Cuzzola. Dave is the chief claim officer at Berkley One and Paul leads property claims and risk management for the organization. They have, respectively, 40 and 30 years of experience in property insurance and claims.

The kindness of friends and strangers

Even on a Sunday, I heard back from Dave and Paul within an hour. First came personal messages expressing support, followed by a few quick questions about what I needed.

They reached out to several companies to see if they could get us on a list for privately funded assistance. That afternoon, Dave gave me the name of a company called Eagle Industries, a New Orleans-based company that makes enclosure products for industrial and construction job sites. They make a poly sheeting that is used primarily to cover scaffolding, but it is strong and durable and could likely do the job as a temporary roof for my family.

I called Eagle the next day. I asked to speak to someone in sales, and was connected to a man named Trey. Keep in mind that I was calling a large manufacturer which sells large quantities of products to contractors in order to ask them to sell me a single tarp to cover my grandparents’ modest home. I fully expected Trey to say, “I’m sorry Ma’am, we don’t have a product like that, and even if we did we couldn’t get it down there,” but I had to try. Instead, Trey immediately stepped into action. He sympathized with our situation, partly because he had lived through Hurricane Katrina and knew all too well what the citizens of Puerto Rico were facing.

Trey and I became a two-person logistics team that made the impossible happen. Over the next two weeks, we exchanged 58 emails. We discussed what my family needed, how much it would cost, and—the biggest challenge—how we would get the tarp to Bayamón. Eagle ended up generously donating the supplies we needed. In the end, the shipment went via freight forwarder, which took 10 days.

Now that a plan for a temporary roof was in place, we worked on assembling a list and game plan to send other emergency items. At last, the Bayamón U.S. Post Office opened and we began to mail items to be distributed among the family.

On the road to recovery

The tarp and temporary roof materials arrived a few weeks later. They were installed in early October, and held up to daily rain. A temporary frame was built using the rope and some spare wood. The new tarp was then taped together and secured with the tarp grabbers. It replaced the basic blue tarp that my family had been using—the type that many Puerto Rican homes still have in place today. Without this loss prevention, the water damage to my family’s home would have been so great that it might not have been worth rebuilding.

Sure enough, it worked. Water did not leak in, and hope was restored as far as the rebuild was concerned. Once the tarp was in place, my grandmother, who had been staying in the apartment below with my aunt and uncle, insisted in sleeping in her room at least one more night. Soon after, she flew to Orlando to stay with her sisters. She would not leave until the tarp had been installed. For her, that temporary roof solution meant her home would be there when she got back. 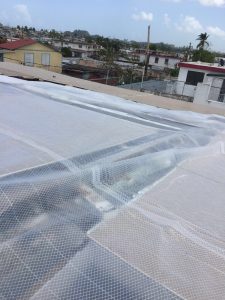 Because there is always a next storm. And when it comes, preparation is key. Here are some things we learned and will be sure to remember in future hurricane seasons:

As I write this, it has now been more than 130 days since the storm. My family is still without electricity, hot water, and basic services like garbage removal, but they’re safe, and they’ll be better prepared next time. The island, and my family’s house, may never be the same, but it will always be the place I call home.

Kelly Ewart is AVP, Strategic Marketing at Berkley One (a Berkley Company).

Editor’s Note: August 2018
Kelly’s family’s home was repaired in April 2018. With the new roof now finished and electricity and water returned to the dwelling, the rebuild is now complete, and on August 1, 2018, Kelly’s family gathered once again for their first family celebration at the newly rebuilt home. Still, many homes in Bayamón and across Puerto Rico continue to struggle with efforts to rebuild.