Texture and textiles: Inspiration from an art fair

For collectors, critics and writers alike, the sheer volume of art to see at these annual fairs makes articulating one’s impressions a bit challenging. I was pondering this dilemma while observing the art and attendees at the Untitled art fair’s Tuesday afternoon opening. I noticed people on their electronic devices, taking selfies, sending images, and perhaps checking their bank accounts to confirm their imminent purchase would go through. Amidst this electronic dissemination of words and images, it struck me that “texting” and “textiles” share the same Latin root, texere, meaning to weave and also implying to construct with elaborate care. And what does art do, if not weave together personal, social, political, emotional and aesthetic ideas?

So, in homage to the idea of textere, I will share my impressions of works I saw this week that both reference the deep tradition of textiles and (literally and figuratively) re-weave it.

European-based artists Lucy + Jorge Orta use a wide variety of media to address social and ecological issues. At first, the entrance of Jane Lombard Gallery’s booth at the Untitled art fair appeared to have a bright sculptural jellyfish with metallic tentacles suspended from the ceiling. Upon closer viewing, I saw that the Ortas’ “jellyfish” is actually a parachute of different African textiles sewn together. Three arms—in the forms of gloves suspended from the textile dome—appear to reach for the supplies below—the pots, pans, colanders, bowls and other basic cooking utensils dangling from the parachute. Now the political and social commentary on migration and politics become more visible. Is this a special delivery being air-dropped to someone in need? Or a survival packet from a far-away place to a remote Antarctic village as the title suggests?

The international flow of people and products moves by air and sea. The textiles and tools we use to live and cook with are two foundational elements that distinguish societies. Our cuisines, clothing and ornamentation (both how we adorn ourselves and our homes) are defining characteristics of our culture—and ones we tend to share with others.

As we humans explore new terrain from Antarctica to Mars, we bring our material culture (and debris) from our original and assimilated cultures to the new spaces we inhabit. The Ortas’ collaborative practice utilizes Lucy’s training as a textile designer in a conceptual way to provoke political and social questions with boundless levels of interpretation. 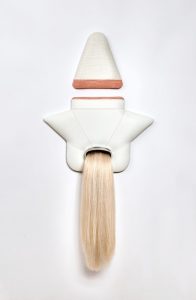 Further into the fair, a flaxen mane of straight long hair beckons provocatively on the wall of Asya Geisberg’s booth. At first glance, a pony-tail emerging from a chrome exhaust pipe set into a white leather wall sculpture evokes the rear end of a horse. It’s almost as if you could expect the entire thoroughbred to be on the other side of the wall. Conversely, the Rapunzel-like extension—whether equine or human—could also be an isolated fetish object, emerging from a metal tube between a car seat or being churned out of an industrial grade production tube. Look beyond the sterile chrome and hair, and you see the presence of the artist’s hand in mandarin orange, as Tillman hand sewed the pieces of fabric together with colored thread, juxtaposing the manual process and industrial sleekness.

Although Tillman studied studio arts, in the past few years she has taught herself special stitching techniques to assemble the leather, vinyl and other industrial fabric remnants she finds and sews into bas-relief sculptures. In Recurring Nova and other works, Tillman references everyday surfaces like countertops and car seats with orifices, jewelry, and hair to create unsettling talismans. Tillman combines these diverse materials to evoke domestic rituals and fetishes, and creates private totemic monuments to these habits and desires.

References to the industrial sleekness of Minimalism, a pop sensibility and the added craft touch of the artist’s hand stitching ultimately reveal a rejection of simple description of process/hand-made and high/low art. Her sculptures are eminently tactile. Alas, no touching! 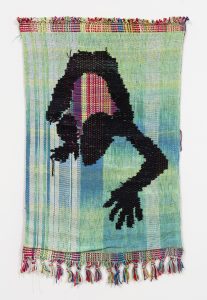 Diedrick Brackens’ in the valley (2017).
Courtesy of the artist and Steve Turner.

The textile weavings of Diedrick Brackens caught my eye for their bold color and intriguing subject matter. A roughly one yard long textile hanging on the wall suggests a black spiderman-like figure crawling along the wall, or potentially along a verdant landscape. The thicker black yarn of the figure almost leaps out from the underlying colored patterns that reference a variety of textile traditions: European tapestries, West African weavings and Southern quilts.

Brackens achieves a painterly-like quality by hand weaving both fibers and colors astutely. It’s like a Jacob Lawrence painting meets the colors of a Joan Mitchell painting on a loom. To quote a term coined by curator Scott Canty, his visual effect is “Fiberlicious.1”

The gallery director at Steve Turner’s booth was kind enough to show me how the textile is hung, with Velcro attached to both the textile and the wall. Ah, I thought, the work becomes a second skin for the wall. That of course has long been the function for the textiles we use to adorn our bodies. Now, Brackens’ textile covers the nakedness of the wall.

A male artist working in fiber arts also challenges the assumption of a genre historically associated with women’s creative production. Brackens, currently Assistant Professor of Fiber in the School of Art at California State University, has ample opportunity to subvert these notions in his own practice, as well as teach current and future art students to expand the boundaries and perceptions of fiber arts. 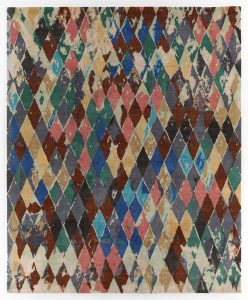 Fibers can also serve as a medium for artists to explore their artistic range beyond the material they work with most often. I can’t help but think of Picasso—best known for his paintings, drawings and prints—who eventually also tried ceramics, and in in the 1950s, collaborated on a woven rug with the weaver Marie Cuttoli.

Like the multi-talented Spaniard, some contemporary artists have engaged in fruitful collaboration with artisans. That’s what I thought when stepping onto a beautifully patterned rug at BravinLee projects. The Charline von Heyl rug under my feet was complemented by other artist designed rugs hanging on the wall. The gallery’s foray into textiles began as an experiment in 2009, and they have since been producing hand-knotted rugs based on designs by contemporary artists such as Philip Taaffe, James Welling and Keltie Ferris, among others.

The collaborative process between the gallery and the artists involves discussion of colors, technique and material. For example, is wool or silk the best option to achieve the correct visual and tactile effect? Once designed, the rugs are woven by weavers in Nepal that are members of GoodWeave, a certification program that ensures no child labor is employed in the creation of the rug.

Charline von Heyl, a contemporary painter known for her dynamic and often enigmatic works, draws inspiration from folk-art, popular culture and art-historical references. Her rug After Zenge is a harlequin pattern of grays, green, blues, mauve and flesh tones. A pattern of contrasts is created by color omissions, painterly drips and “painting outside the lines” that activates the entire rug. If this were on a wall, we would get the impression that paint had peeled off in places.

Yet the artistic process is not a simple transfer of a JPEG file of a painting to the weavers. Karen Bravin, a co-owner of the gallery, commented, “We approached Charline because we loved her work and we thought that it would make for a very rich and complex rug. Our editions director, Carolina Mandia—who is also a textile designer—worked with Von Heyl to translate one of her paintings into a rug and pick out the material best suited to the pattern and colors, which in her case ended up being a wool and linen blend. Our dialogue continued for several months until we achieved the ideal rug design.”

It is always enriching to be stimulated by the creativity around us. Weaving together the old and the new, the political and social, allows artists—and invites us as observers—to redefine and reinterpret existing stories, social norms, or other creative works. It is the artist’s role to create, and ours to challenge ourselves to be open to new ways of seeing. Artists, museums and art fairs like those taking place in Miami give us that opportunity.


1Scott Kandy had curated an exhibit titled “Fiberlicious” at the Los Angeles Municipal Art Gallery in L.A. in 2015.
Sending... One Moment.