Minerals are the new rock stars: History and essentials

If you were royalty, would you want an Iron Throne or a crown made of precious minerals? While the regal chair assembled of metal-forged swords became a visual symbol of the desire for power in the popular series Game of Thrones, a symbolic headdress would probably be easier to create, weigh a lot less and be more valuable. A metric dry ton of iron sells for around $93, while this past summer, some stibnite crystals—weighing a few ounces—sold for $5,250 at Heritage Auctions.1,2

Coincidentally, the mineral stibnite bears a visual resemblance to the iconic metal throne. Geologists refer to its unique oblong jagged forms as an orthorhombic space group. Both iron and stibnite are mined from the earth—however while iron is lumpen and must be transformed by a blacksmith’s human creativity, stibnite is aesthetically stunning by nature. (It is, however, toxic—so handle with care.) Metals are functionally useful, and minerals are geological wonders of nature. 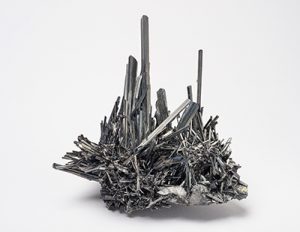 Minerals like stibnite are prized for their aesthetic and sculptural qualities, which are reflected in high prices for desirable examples. Japanese stibnite is considered the most rare and desirable; an example with provenance back to the famed Ichinokawa mine, measuring 5 x 6 x 12.5 inches, sold for a record $95,600 at Heritage Auctions a few years ago.3

You don’t need to live in Westeros or any other magical kingdom to access the beauty of exotic minerals. This form of sophisticated rock collecting draws enthusiasts and collectors worldwide, who source specimens from local mines, mineral dealers, specialized auctions and more.

Rocks of the ages

The earth, with all its topographic variations, is made up of rocks—which are in turn made up of minerals. Through thousands of centuries, our planet’s shifts, eruptions, and erosion have changed the landscape, and rocks are both evidence and remains of these natural activities.

Certain rocks and minerals have drawn the attention of human civilization for their aesthetic properties. Cleopatra was known for using the mineral kohl as an eyeliner—though, today, when the word kohl appears on cosmetics, it refers to only the color, as the mineral itself contains lead and is not FDA-approved for cosmetics.4 Jewelry with lapis lazuli has been found in artefacts from ancient Mesopotamian, Egyptian and Chinese cultures. Lapis lazuli is a striking rock whose distinctive blue color reveals high concentrations of the mineral lazurite. White veins amidst the lazurite reveal the calcite mineral.5

During the Renaissance, wealthy citizens gathered all sorts of visually intriguing natural and man-made objects and displayed them in so-called “cabinets of curiosities”.6 Rare minerals would be among the articles on display, and serve as a conversation point during dinner parties.

An interest in the physical composition of our world was defined—literally and metaphorically—during the age of Enlightenment. This era of 18th-century scientific inquiry, categorization and classification produced the Scottish farmer and naturalist James Hutton, the “Father of Modern Geology. He observed that the earth is continuously transforming, and that by understanding the process of erosion and sedimentation, the history of the earth could be revealed.7

For mineral collectors, a scientific approach may not be the primary catalyst for collecting, but for most, both an intellectual and aesthetic appreciation is inevitable.

Wendell Wilson, editor of the journal The Mineralogical Record, acutely observes that mineral collecting, “can be thought of as dealing with the visible and invisible, respectively. Purely aesthetic appreciation requires no mineralogical knowledge whatsoever. It deals with only what we see. But once we lapse into an appreciation of unseen aspects which a specimen represents or reflects, we are necessarily involved in an experience requiring some scientific and historical knowledge.”8

So what’s in a mineral? And what differentiates it from a rock? All minerals have a definite chemical composition, while rocks do not. Thus all minerals are rocks, but not all rocks are minerals.

As Dr. Kevin Schofield, a geologist at Green Mountain Minerals, attests, “Rocks are an amalgamation of minerals which come together either as a result of crystallization from molten material, recrystallization as a result of the effects of high temperatures and pressures, or erosion and redeposition of other rocks at the earth’s surface.”

With over 5,400 minerals recognized by the Mineralogical Society of America, where can a collector begin?9 One way is by simply noticing what’s around you. Quartz is one of the most common minerals found in rocks—about 12% of the earth’s crust contains it!10 When pure, this silicon-and-oxygen-based mineral is transparent and colorless. 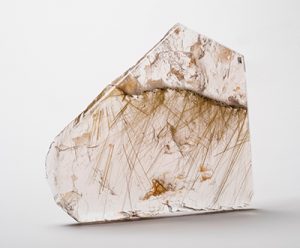 Quartz with Rutile Inclusions. Image: Courtesy of Robert R. Weiner Collection, Bruce Museum. Photo by Paul Mutino.
Rutile is a titanium oxide mineral that appears in many household products. Yet in the geological world, it has a tendency to grow as needle shaped crystal within other minerals.

Dr. Daniel Ksepka, Curator of Science at The Bruce Museum in Greenwich, CT, confirms the mineral’s ubiquity. “With a little geology background, one starts noticing quartz everywhere—in milky white veins that formed in fractures in ancient rock, in blocky crystals popping out of rock outcrops along mountain trails, and even in tiny crystals polished down to smooth beads by the waves. What makes quartz delightful is that one can find it in so many different colors and sizes.”

However, as Dr. Schofield points out, quartz’ ubiquity does not make it any less collectible, “Some people collect only different types of quartz. These may be variants on the basic crystal shape of a hexagonal prism, or one of the many varietals which are due to the presence of other minerals (needles of rutile for example) or trace elements such as iron, which produces the characteristic purple of amethyst. Smoky quartz forms as a result of natural irradiation deep in the earth.”

Whether driven by a photogenic or a scientific curiosity, all mineral collectors hold a piece of our geological DNA, a part of earth’s ongoing creation and regeneration. Learn where to find specimens and how to care for them in Part II of this series, Finding rock groupies: Mineral collecting and care.