Through the lens of collaboration with Paul Octavious

After teaching himself how to use a camera as a way of complementing his graphic design pursuits, photographer Paul Octavious recalls his first project as a deeply personal one. 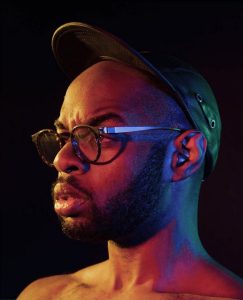 “I dropped out of school to help my grandpa, who had Alzheimer’s,” he says. “I documented him for about a year, just playing around with my camera. I didn’t even realize I was documenting him at the time—I was just taking photos and posting them on the Internet.” Octavious did the same with many works to follow, capturing various subjects and sharing with an increasing number of fans. So much so that in the advent of Instagram, he was added to a list of names the app suggested users follow.

“I remember seeing it. It said, ‘You should follow Beyoncé, Oprah and…Paul Octavious,’” he recalls. “No one really knew who I was, but people started following me.” Things skyrocketed from there, landing the artist with 540,000 followers on the platform today and a portfolio of clients ranging from Hermès to Starbucks, Mercedes-Benz and more.

Most recently, his work can be spotted in real life at Chicago’s Esmé, a fine dining venture from acclaimed chef Jenner Tomaska, where each dish of the multi-course tasting menu is inspired by one of Octavious’ works—and where each dinner booking benefits the artist’s charity of choice: Hugs No Slugs, a nonprofit serving at-risk individuals on Chicago’s South Side. The project came about when Tomaska and his partner Katrina Bravo approached Octavious as their first artist for what would be an ongoing series of collaborations, propelled by their mission to shine a light on Chicago’s local art scene while also providing a chance to give back to the community. “It felt really natural,” Octavious remembers. “Jenner and I share a very curious mindset about approaching these things.”

The menu features 14 courses alongside the same number of works by Octavious, which span more than a decade. “Because I’m always gaining and applying new skills over time and through experiences, no series or photo is ever done—I like to revisit images to see how they’re talking about what’s happening in the world, whether political, artistic, technological,” he says.

“It’s important for me that I’m always looking back on my work and showing it to new audiences.” 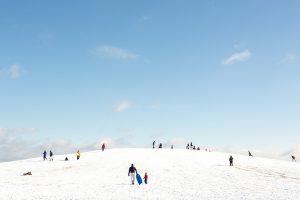 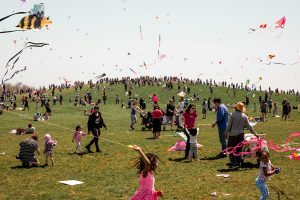 This is seen in two of the artist’s most popular works: “Snow Hill” and “Kite Hill,” images of the same hill (taken on different days) that Octavious has been documenting for nearly 12 years in his Chicago neighborhood. “This series is an example of how something can change over time.” 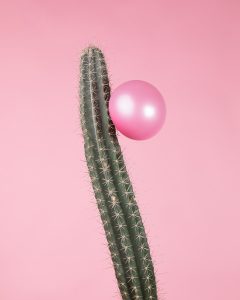 He is just as drawn to subject matter that prompts questions, such as the experience he had in shooting “Bubble Gum Pop,” an image of a cactus that appears to be blowing a piece of bubble gum.

“This one is very conceptual and really fun. I like it when something can make you wonder, ‘How can that happen?’”

Octavious titled the project with Esmé “Peculiar Contrast, Perfect Light,” in part to reflect his work’s long-running relationship with light.

“As a self-trained photographer,” he adds, “I knew the only way to learn more about how to use light was to play with it. Author Malcolm Gladwell says that in order to become proficient at something, you need to do it for 10,000 hours, and I feel like I’ve clocked more time than that.”

Another inspiration behind the title was honoring artistic director and Chicagoan Virgil Abloh, who passed away last year.

“It was the title of his last fashion show, and I wanted to celebrate him in some way,” notes Octavious, who recalls working with Abloh when the designer and entrepreneur selected Octavious as a photography mentor for local youth with the NikeLab Re-Creation Center, a summer-long residency Abloh helped organize in Chicago. It’s just one of the many ways Octavious’ vocation has prompted him to join forces with fellow creatives whose talents include writing, drawing, cooking and beyond. Here, Octavious shares with us four of the most important takeaways he’s learned when it comes to teaming up well.

Octavious can remember from an early age the importance of building and maintaining trust—one of his first collaborations had him pairing up with his childhood neighbor and best friend to create a children’s book. “My friend would write a few words, give them to me and I would create illustrations to accompany them—along with illustrations for the next set of pages, which he would then need to write words for.” By the end of their work together, the two had a 60-page children’s book about a moose named Enor that wouldn’t stop growing (aptly titled Enor Moose). It wasn’t the only thing that grew—that project was the start of what would total three books together.

“You have to trust that the person you’re collaborating with is going to give you something good to work with,” notes Octavious. “You shouldn’t dim someone’s shine—let them do their work.” 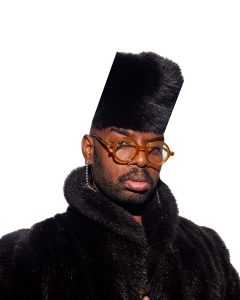 In one of the first collaborations of his photography career, Octavious asked artist Chuck Anderson to draw on top of one of his images. “In the earlier days of street art and graphic design, people were drawing on photos—I could shoot photos, but I couldn’t draw,” Octavious notes. “If you give someone your art and ask them to draw on top of it, you really have no say on what or how they’re going to draw. It taught me that if you collaborate, you have to let go and let someone else have their time to speak through the art.”

Octavious applies the same philosophy to photography—with the lens angled at him. “If a photographer was photographing me, and if I didn’t like the image, but they loved it, they’re the artist, and they’re the person who saw something different in the image, and in me. It’s all about the eye of the artist.”

Allow everyone’s voice to be heard

Regardless of whose name is more prominently or publicly displayed, Octavious stresses the significance of everyone being recognized. “If a colleague’s work is being presented in an exhibition that we collaborated on, it may be them getting the glory—but so long as I can look at the works and say, ‘I did this, too,’ then my voice was also heard,” he says.

“I believe that listening to everyone and ensuring everyone’s voice is heard throughout the collaboration is key.”

When entering into a collaboration, Octavious encourages an open mind about the project’s potential. “It’s important to picture what it could be, not what it should be—entering in with an understanding that your vision may or probably will change, and that it’s OK to allow your art to become something you didn’t originally envision.”

Take, for example, the Esmé project, for which Octavious gave Tomaska nearly two dozen images, and Tomaska selected those that most spoke to him. From there, it was a thoughtful culinary process that required case-by-case consideration and communication. “I would tell Jenner about certain images but not about others, and he’d create a dish from that work that would floor me,” notes Octavious. “I’d think he would be making one thing, but I’d find that I was totally off. And that’s the beauty of collaboration—watching another artist take something into their own hands and having fun with the unpredictability of it.”

Such was the case with “Primary Dish,” an image Octavious created based on the film Hook— specifically, the scene when the Lost Boys are sitting with Robin Williams at a banquet table and trying to reveal to him that he’s Peter Pan by urging him to close his eyes, believe and open them again to an epic feast, centering on bowls of candy colored whipped cream. “I thought Jenner might take it in a more literal direction, but he created a dish featuring shaved ice, to which guests can add their own choices of colored syrup,” he says. “It was wild.” 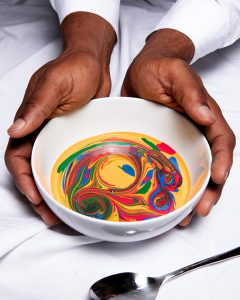 Those end-result moments feel especially sweet, notes Octavious, when it helps you to see or appreciate something in your work that you didn’t before recognize. “It’s a really special thing to see someone be inspired by something you did.”

Berkley One is a Berkley Company and a provider of customizable insurance solutions for modern families. We can help you protect the things you love. Learn more about our insurance offerings—including solutions for homes, condos, rentals, autos including collector vehicles, liability, fine art, jewelry, collectibles, recreational marine and more here.