Setting sail across — and for — the world

How SailGP is serving up entertainment and environmental good alike

When a $1 million prize and trophy title are at stake, you know it’s going to draw a crowd. Add to that mix the world’s fastest boats, nine teams, and eleven destinations across the globe, and you’re looking at one of the most exciting events in sports today. 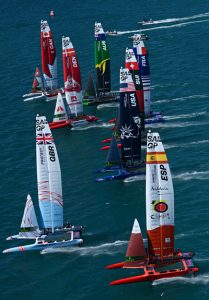 In its first season in 2019, six teams from Australia, Great Britain, the United States, France, Japan, and China competed at five venues around the world. By Season 2, the league expanded to eight teams from Australia, Great Britain, the United States, Japan, New Zealand, Denmark, France, and Spain, racing at eight events. This year, nine national teams (the same lineup sans Japan, and with the additions of Switzerland and Canada) embarked on a course that is taking them across eleven destinations worldwide before culminating in a final race this May in San Francisco.

According to SailGP.com, it’s all made possible by one of the most revolutionary boats on the market today: the F50. Capable of reaching speeds upwards of 60 miles per hour while flying above the water, this 50-foot hydrofoiling catamaran calls for the world’s top athletes to operate them (including several with Olympic Games experience).

In addition to their speed, these vessels are savvy, spinning out more than 40 billion data points in just one race day—data that these teams share with one another, encouraging an equal playing field via total transparency—and ensuring that the best team wins. 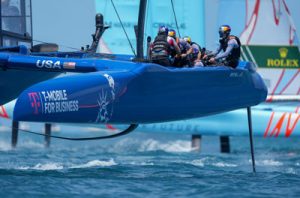 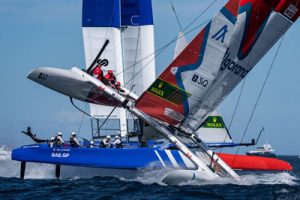 The event has already sailed through Bermuda, Chicago, Plymouth, Copenhagen, St. Tropez, and Cadiz, and plans to continue on to Dubai, Singapore, Sydney, Christchurch, and San Francisco—and fans can attend any one of them in real-time onsite or online (it’s broadcast to more than 190 countries—and in the U.S., via CBS and CBS Sports).

If you’re one of the lucky ones to attend, prepare for a two-day spectacle of races—three on day one and three on day two, followed by a final podium race between the top three teams to determine the winner. Once there, you won’t want to move (or blink, for that matter). Races typically last between 12 to 14 minutes and feature multiple lead changes and close-to-shore action, keeping fans on the edge of their seats.

In addition to serving up ample entertainment, the races serve the earth. As a way of addressing climate change, SailGP developed the Impact League, a world-first initiative fostering sustainability in sports and accelerating a transition to clean energy. 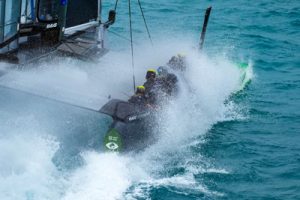 The league tracks the positive actions the teams make throughout the competition to reduce their carbon footprint (from pioneering new clean energy solutions to removing all single-use plastics), recording them on a second leaderboard that runs alongside the Season Championship.

At the close of the season there will be two podiums, and two trophies—one for the competition, and one for the Impact League. The latter’s winning team is crowned alongside the Season Champion and earns funding for its purpose partner, an environmentally-geared nonprofit that supports and advises the team throughout the season.

To learn more about ways to tune in or attend any of this year’s events, visit www.SailGP.com, who provided background for this article.