Gather ‘round the fire’

How fire is fueling the creations— and inspirations —of these entrepreneurs

Between its deeply primitive origins and mesmerizing effects, there is something undeniably magnetic about fire for us all—including the creatives in the room. Entrepreneurs across the globe are turning to fire to hone their craft by way of food, art, and community—and all the while, it’s sparking (literally) new ideas. From Chi-style BBQ to ceramics, here are just some of the ways to celebrate the phenomenon of fire.

Chef D’Andre Carter’s love for BBQ started at his grandmother’s house on the South Side of Chicago, where he helped her make Sunday dinners for friends and family. After graduating from Le Cordon Bleu College of Culinary Arts and working in Chicago’s fine dining restaurant scene, he teamed up with Heather Bublick to launch Soul & Smoke, a restaurant specializing in traditional BBQ with an elevated twist. Diners can head to three Chicagoland locations to try favorites like pulled pork, smoked brisket, and rib tips—all of which showcase Carter’s signature approach and deep knowledge of fire.

“Fire is the most basic element in cooking, but it’s also quite complex.” 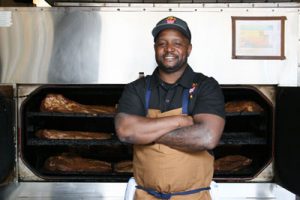 “In order for it to yield the product you desire, you need to understand it—what kind of wood to use and how much, how much air to give and when, and when in the fire’s life cycle to start cooking,” he says.

While that know-how is important across the culinary field, it’s particularly important when it comes to BBQ. “Without fire there is no smoke, and without smoke there is no BBQ,” he says.

“Fire provides heat to transform the texture of the product, and smoke to enhance the flavor— within just these two categories, there are endless variations that can be tested, tweaked, and mastered to produce something as delicate as a smoked béchamel or as hearty as a whole smoked brisket.” 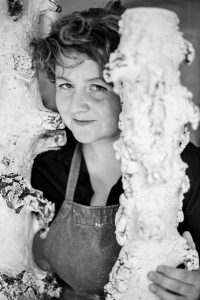 Situated in the heart of Manhattan, Jason Jacques Gallery has spent the past 30 years developing relationships with international artists who work in contemporary ceramics—including Londonbased Aneta Regel, whose interest in the medium began during her studies at the Academy of Fine Arts in Gdansk, Poland.

“I’m fascinated with the transformative qualities of both clay and stone, and how they can be explored,” says Regel, who tries to convey her approach through natural phenomena such as trees, rocks, and riverbeds. Fire, of course, is prominent in her process: “The kiln is at the center of all of my work. It allows us to play with the notion of tof time, which I find inspiring.”

“Clay-life encompasses a great deal of largely unspoken experiential potency, and I want it all, including the beautiful place that fire holds for us.” 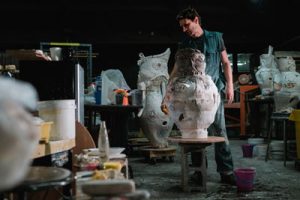 “Igneous forces shaped us and all we behold, and in this sense, every phenomenon is ceramic at its core—this idea continues to inspire my immersion in the medium.” These pieces occasionally take years to complete across the stages of wheel-throwing, multiple manipulations, glazing, and final material touches.

After recognizing a market need, Trey Miller founded Southern Andiron & Tool Co., a company dedicated to education and manufacturing around the at-home fireplace. Since starting in 2019, the team has created a list of offerings that include tools and screens, all of which are handmade and hand-forged at their shop in Chamblee, Georgia.

And then, of course, there are the andirons—bracket support on which logs are laid in the open fireplace that can help increase air circulation (and decrease smoke). It’s unlike the fireplace grate—what most of the U.S. population uses—a tool of multiple steel bars that suppresses oxygen and that was originally called upon for coal fires. 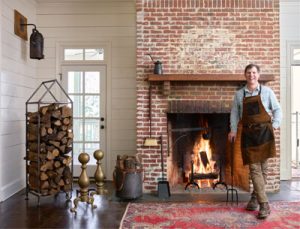 “Andirons date back to 3 A.D. and ensure a cleaner, hotter fire,” notes Miller. “We teach folks how to burn their wood instead of cooking it like coal.” That education is a priority for Miller and his team, who offer fireplace consultations to help clients determine what their biggest goals are and how to best accomplish them—a task made easier by the specificity of each custom-made tool. A longtime advocate of gathering around the fire, Miller hopes to inspire that same passion and curiosity for others.

“Nothing fosters community more than the open fire.”

“The fire was a life source—it became the kitchen as we cooked, the laundry room as we boiled our clothes, the shop as we made candles, soap, and dye. We are helping the world to stop watching TV and their phones and start watching the fireplace—where we talk to one another, and where we connect.”