Electric is going mainstream— and car enthusiasts are ready for the ride.

With all the hum about electric models in the news (and on the roads) recently, it’s hard to believe that the first time electric vehicles (EVs) had their moment was well over a century ago. In fact, it’s estimated that a third of early vehicles on the road were electric, until the invention of the Model T made gas-powered engines popular. Flash forward to today, and electric is back in the spotlight—EV growth is reported to have more than doubled in the first half of 2021 against last year, outpacing the broader auto industry. And while this space has recently been seen by many as synonymous with one manufacturer (nearly 80% of EVs registered in the U.S. in 2020 were Teslas), today more and more automakers are debuting electric vehicles in their lineups.

What’s more, these new models are making big waves in the auto world—earning top scores from Motortrend and Edmunds, for example. Today’s EV releases boast road trip-ready bells and whistles—from smart technology and driver assistance features to impressive range and fast charging capacities—and are more approachable and affordable than ever. From an all-American supercharged truck to one of Europe’s sleekest sustainability-savvy sportscars, here are 5 of the top EVs turning heads right now. 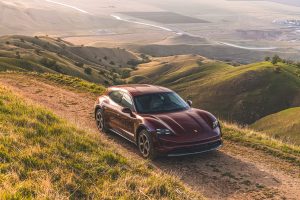 The name Taycan, the moniker behind the first fully electric Porsche, was inspired by two Turkish terms that best translate to “the soul of a spirited young horse”—and that’s exactly what its makers hoped for with the debut of this luxury electric vehicle.

Notable features include an 800 volt battery (versus the average 400 volt), which delivers more consistent high-output performance both on the road and at the charging station (during optimal conditions, expect a main battery charge from 5 to 80 percent in just 22 minutes). Chassis development was also key in its production. To create a luxury sedan first and a sustainable vehicle second, the brand outfitted the model with adjustable air suspension, rear-axle steering and active sway-bars, allowing for a smooth, comfortable ride when rounding corners or hitting the highway. Natural stability can be further credited to an under-the-floor battery pack and the low center of gravity it provides. 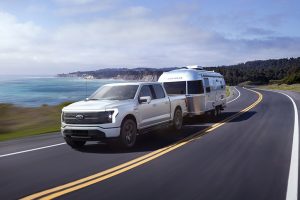 Ford’s shift toward electric has started with some of its best-selling models—including the F-150. Set to release next spring, many believe the Lightning version will live up to its reputation, packing serious power—and serious space. Case in point with the Mega Power Frunk, a front-loading trunk featuring 400 liters of volume and 400 pounds of payload, in addition to a total target payload of 2,000 pounds (meaning that yes, you can now bring both full-size golf club bags).

If you’re worried about those extra pounds weighing down your ride, know this—with a targeted 563hp and 775-pound-feet of torque on the extended range version, it’s the fastest Ford F-150 ever (tackling zero to 60 miles per hour in the four-second range). 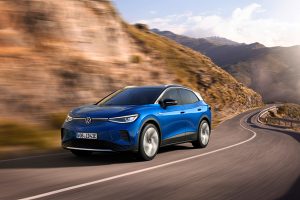 Though Volkswagen built several experimental EVs in previous years, they were adaptations of existing traditional engine vehicles— making the ID.4 (and ID.3) the brand’s first EVs built from the ground up. Debuted just this March, the model comes with an 82 kilowatt-hour battery pack that gives the Pro S version an EPA-estimated range of 250 miles and a 201hp electric motor (that enables it to sprint from 0 to 60 mph in about 7.5 seconds.)

Other features for tech fanatics? “Hello ID.,” a voice-activated assistance; ID.LIGHT, a windshield base light that responds to various vehicle situations and a full suite of Level 2 Automated Driving assistant features. 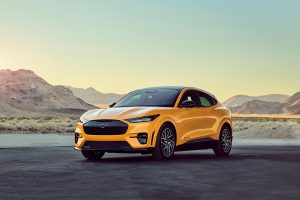 Ford has also expanded its portfolio with the Mach-E, an all-electric Mustang SUV that’s designed to be just as fun to drive as the original.

And they’ve kept the changes coming with this model, as seen with over-the-air tech updates that affect performance and software, the latter of which can be read on a whopping 15.5-inch touchscreen—the first of its kind for Ford. These features will be combined with this fall’s BlueCruise update, the brand’s hands-free highway driving system and a panoramic fixed-glass roof. 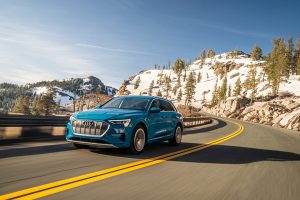 Audi is going big on electric— they expect 30 percent of sales to come from electric vehicles by 2025 and plan to launch EVs exclusively starting in 2026. Their current lineup includes five EVs in the portfolio already—including the e-tron, their first fully EV that carries several selling points, from a 220-mile range to an award-winning MMI (Multi Media Interface) to qualification as an IIHS 2021 TOP SAFETY PICK+.

The makers didn’t sacrifice luxury in the process, either—buckled in, drivers will experience this brand’s quietest cabin (beating out even their highest-end rides, including the A8).

Berkley One is a Berkley Company and a provider of customizable insurance solutions for modern families. We can help you protect the things you love—like your newest vehicle. Learn more about our insurance offerings—including solutions for homes, condos, rentals, autos including collector vehicles, liability, fine art, jewelry, collectibles, recreational marine and more here.

1 https://www.energy.gov/timeline/timeline-history-electric-car
2 https://www.wsj.com/articles/electric-vehicle-sales-growth-outpaces-broader-auto-industry-11627032601
3 https://www.kbb.com/car-news/79-of-evs-registered-in-the-u-s-last-year-were-teslas/
4 https://www.consumerreports.org/hybrids-evs/why-electric-cars-may-soon-flood-the-us-market-a9006292675/
5Information on each model sourced with permission from the manufacturers of the autos spotlighted.
Sending... One Moment.